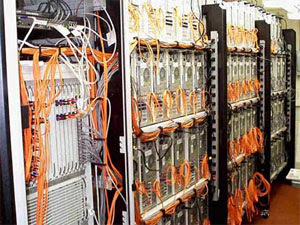 The Scots have developed pretty neat little gadget, a green supercomputer. Although the phrase may be perhaps an oxymoron, the machine does consume 10 times less energy and is 300 times faster than its traditional equivalents. That seems like the right direction.

The computers name is Maxwell, which incidentally is not a bad idea in and of itself; perhaps giving the thing a name will promote better maintenance practices to extend (his?) life. Maxwell also operates in less space (only two racks) and runs much more coolly than equivalent machines. He's pretty difficult to program right now (probably because he's using "field programmable gate arrays (FPGA) in place of conventional microprocessors"), and solving this communication problem will take another two to three years. But after that, he will be on the force, solving a variety of problems from the oil and gas industries, amongst others. Good boy, Maxwell!

Posted by Mark Ontkush at 7:16 AM
Labels: supercomputing