Aliens Take One for the Team, Save Earth by Ramming Meteor 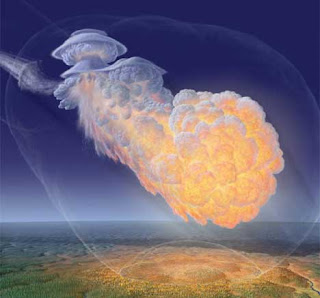 After taking out a wind turbine in Lincolnshire in January, fears that the aliens weren't so keen on helping us out of our planetary predicament resurfaced. Hope springs eternal though - Fox News recently reported that Dr. Yuri Labvin, president of the Tunguska Spatial Phenomenon Foundation now thinks that a UFO deliberately crashed into a meteor above Siberia on June 30, 1908, saving all humankind. Is this (and there's no better way to put it) insane? Of course it is, but that doesn't stop an increasing number of people from demanding that the government use known alien technology to save us from ourselves. Press onward for the skinny on the latest turn of events.

The event that Dr. Labvin is referring to is the Tunguska event, a mysterious blast that downed over 80 million trees for 100 square miles. Eyewitnesses reported a bright light and a huge shock wave, but the area was so sparsely populated no one was killed. Occam's razor comes in handy here - most scientists think the blast was caused by a meteorite exploding several miles above the surface. But Labvin goes one step beyond, pointing to some quartz slabs with strange markings found at the site. Obviously, they are parts of an alien control panel which fell to the ground after the aliens hari-karied themselves into the giant rock. You know, when they killed themselves to save us. You still here?

Universe today puts quite a bit of this nonsense to rest. For starters, this isn’t the first time a UFO has been associated with Tunguska; in 2004, a different scientific expedition found a supposed "extraterrestrial technical device" at the site, but no subsequent reports or analysis were revealed. Assuredly it's in a huge Russian government warehouse next to the bright yellow surplus cheese. Lavbin says these quartz stones when put together form a map; maybe even... part of a navigational system of a spaceship. Universe today classifies this as sounding a little bit like pareidolia where random images seem significant - the man in the moon, the virgin mary on a piece of toast, that kind of thing.

We can be open to aliens saving the planet in a Jodie-Foster Contactesque kind of way and we should be; the scientific possibility must be acknowledged, remote as it is. But this latest event just seems like another "Technology Gone Wild" prayer that, terrestrial or otherwise, doesn't seem to hold a lot of water.
Posted by Mark Ontkush at 8:39 AM
Newer Posts Older Posts Home