eWaste, China, and Your Basement 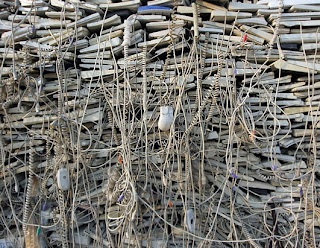 I was reading an article this morning that summarizes a paper on how the EU directives on eWaste will affect the entire world. Pretty good piece, but I noticed that it kept using the 'C' word which bothered me. I decided to try and get to the root of the problem. Natch, The 'C' word refers to China.

Anyone who does their own quasi-research on Google will realize that it seems like most wasted electronic goods are sent to China. There are hundreds of articles, many of them old, that document places such as Guiyu, often accompanied by disturbing pictorials. The article referenced above supported this as well:

The United Nations Environment Programme estimates that the world's population discards 20 to 50 million tons of electrical and electronic waste each year and predicts the mount will increase by 3% to 5% each year. Much of that waste ends up in China.

"So far, the policy in the United States has been to ship it to China," Selin said. "I'm not sure how long China will think this is a good idea. The most practical thing I can think of is to increase recycling. I think the federal government will follow the states."

The funny thing about this for me was that I remember reading that China banned eWaste imports back in 2004. Oh wait, they banned it in 2002. Oops, hold on, China put their foot down all the way back in 2000. Aha, I think I see the problem. Maybe banning something in China doesn't mean jack, kind of like when the EPA bans DDT but allows unlimited exemptions for emergency use.

The other thing that struck me was I wondered how much eWaste was getting shuttled over there, when experts agree that 75 percent of eWaste is being warehoused in your basement. You know, its those keyboards in the cupboard, those broken cell phones, that old TRS-80 Color Computer you're just dying to hook back up to your television. If China is the processing plant, we are definitely the warehouse.

So, is China still accepting eWaste? I seriously couldn't figure it out, I will need a few days to come up with a good opinion. One thing seems certain though; if "business as usual" - that is, kids are running through mountains of waste getting lead poisoning - is still standard, then there's no law. And by the way, from the same article it appears that China really, truly banned eWaste in 1996.

Mark,
I've just read your latest snippet with interest. We're a UK based recycler and started our business having traded closely with/ brought goods off other recyclers in the UK. Basically, the reason we started up was because our contacts in the industry were actively exporting ewaste to developing countries. The exporters in the UK are extremely resourceful, containerising everything and selling them to supposed refurbishers abroad. The downside is that anything received that is not considered viable is simply discarded in unmanaged landfill. Similarly, refurbishment and resource extraction is completely unmanaged with no regard for health and safety, let alone environmental contamination. Our experience has taught us that this is due to a "fast buck" mentatlity amongst those entering into the recycling trade, coupled with a desperation to off-load unwanted equipment by those in UK businesses. It may be a case that UK businesses are in effect putting their ewaste collections "out to tender" on the basis that the lowest bidder wins. A prime example of this is the Local Council authority, whose Environmental officers are desperately trying to clamp down on UK ewaste dumped on our own doorsteps, whilst the local council itself is empoying a "recycler" who is simply using a third party exporter to get rid of CRT monitors. Of course, having spoken to environmental officers, they appear very much unable to deal with the issue, being extremely stretched already.

Of course, ewaste export looks to be carrying on unchecked, even by large recyclers (there's a rather large one in London). Having visited the offices of this company as a purchaser on a number of occasions, I've sat in the reception area with customers definately not from this continent. I suspect it's a case of win a contract to dispose of a company's waste and then sell for export as quickly as possible. High volume, low overheads and low costs, masked up as a "Not for profit", free or "We invest in training through microsoft MSCE schemes". It's all cloak and daggers over here. ring a recycler up and say" I've got this to get rid of" and they'll start telling you about the registration they have and the licenses needed just to remove the equipment, but they won't tell you where it eventually ends up! The point I guess is that it's a damn nightmare trying to stop the Cowboys or men with White vans!


thanks for posting, always interesting to hear from the horses month what is going on.

sounds a little bit like the wild west in the UK, largely unregulated, big bucks being made. I think at some level China actually wants the waste to grow their economy, but that is probably changing soon.