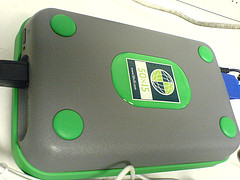 You might have heard about AMD's project to bring 50 percent of the world online by 2015. It's called 50x15, and it's a pretty grand initiative:

...today, less than 15 percent of the world's six billion people have access to the Internet and the economy it is helping to drive. This not only prevents people in high-growth and developing regions from realizing greater educational, social and business opportunities, it also limits the opportunities for their country's economic growth and participation in the global economy.

AMD's 50x15 initiative is a bold and far-reaching effort to develop new technology and solutions that will help enable affordable Internet access and computing capability for 50 percent of the world's population by the year 2015. With the global population estimated to reach 7.2 billion people in 2015, there is tremendous potential for 50x15 to bring billions of people into the digital age.

It's an interesting idea, and I can agree with the nub of the argument. I'm kinda wondering where this project ranks in terms of other global projects, like access to drinking water (about 1 in people people don't have) and elimination of diarrhea (responsible for 18 percent of all children's deaths). Can we really get 50 percent?