One Thin Client Per Child 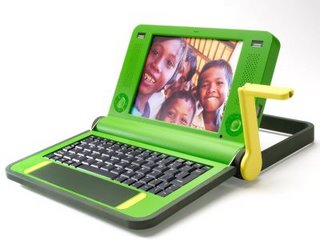 I love the one laptop per child project that MIT is running. I can remember the first time I looked at Yahoo using a text-based web browser and remembering having this mind opening experience. This overwhelming sense that, wow, this Internet thing would change the world.
Unfortunately, not everyone is agreeing, as India has just opted out of the One Laptop Per Child program. Education Secretary Sudeep Banerjee summed it up, saying:

"We cannot visualise a situation for decades when we can go beyone the pilot stage. We need classrooms and teachers more urgently than fancy tools."

I don't know if I agree with the statement or not; what it does call into question for me is appropriate use of technology that is sustainable. Lots of companies have no problem spending money on technology - it's the future, we need to compete, etc. But here's a entire nation that is essentailly saying "we are not going to spend $100 dollars for universal access to one of the most basic forms of technology." It makes you wonder.
Posted by Mark Ontkush at 3:56 PM

Mark-
I can understand the Education Secretary's reluctance. First, $100 per kid is a lot a lot money in a country with I would guess aboue 300 million folks under 18. Second, in a country where a large portion of the population probably llives on just a few dollars a day, $100 is a lot. The equivalent in the US would be something like several thousands of dollars per child--which we believe is too much money to spend on child on something as basic as health insurance. Third, $100 worth of food, water, and medicines probably brings a lot more joy & health to an Indian kid than a $100 computer.
Just some thoughts...
Brian