Foedus on Track with Virtualization 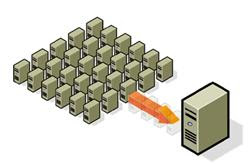 You probably know that most companies use computers to provide a variety of business-centric services that are critical to their success. These machines are known as 'servers'. Each server usually performs a single, specific duty; there's the email server, the accounting server, the print server, etc. Oftentimes each server runs on its own separate hardware, and is controlled and managed as a single unit. IT personnel really like this, as it makes each application far easier to troubleshoot and maintain than if everything was lumped together on one box.

A lot of that is beginning to change with a new technology that allows for several of these machines to be consolidated and run off a single computer. This process, known as virtualization, is still in its infancy, but will have tremendous ramifications for the environment. Foedus, a three year old Portsmouth, New Hampshire-based company, specializes in this process. Mike Reilly, CEO of Foedus, was happy to fill in the details.
According to Mr. Reilly, most servers are only run at about 5 to 12 percent utilization; that means that the processor, or CPU, is only doing work for that amount of time. In addition, servers use a large amount of electricity, much more than your typical desktop or home computer. How much? Mr. Reilly estimates that each server uses between $300 and $550 per month in electricity. So the idea here is clear; if there was a way to put a lot of these machines onto one piece of hardware, companies could (a) save a lot of energy, (b) buy a lot less hardware, and (c) throw away a lot fewer machines when they reach their end of life.

The savings are substantial; Reilly estimates that a typical project reduces the numbers of servers by a factor between 10 to 1, and 20 to 1. That turns into, on average, a 40 percent overall cost savings and an 80 percent reduction in hardware purchases. And the good thing is that almost all servers (95 percent) are candidates for virtualization. Only a few, typically running old software or 'legacy' applications, are not.

The downside is fairly minimal; personnel require some additional training in the virtualzation software. It is of course, new, so there may be some reluctance at implementing it corporate wide from the get-go. But, as Reilly says, the good thing is that you can try it out on a few servers and see how you like it. Virtualization is clearly a revolution, probably as big as the invention of networking, and it's sure to be a big hit for companies, and a low hit on the environment.

Posted by Mark Ontkush at 8:32 AM
Labels: virtualization